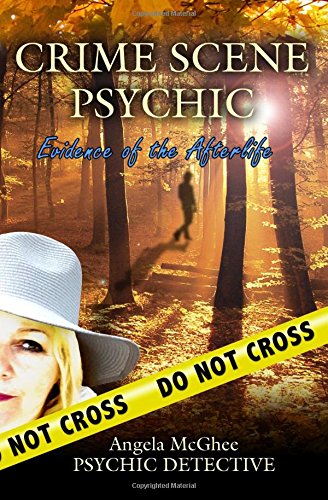 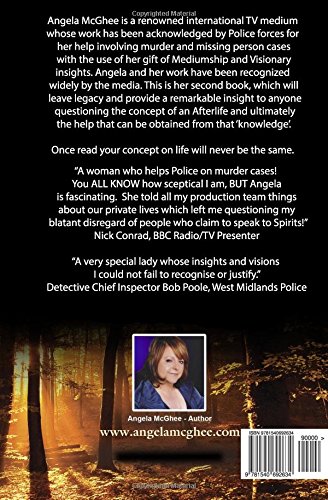 excellent read giving proof of life after death.,
By
Mrs. P. A. Lee
Verified Purchase(What is this?)
This review is from: Crime Scene Psychic: Evidence of the Afterlife (Paperback)
Great read. This lady is very humble without ego which makes a change. Fascinating look about her life and its difficulties and how her psychic abilities developed. I was amazed at her story about how she worked with the police to help solve crimes. There areblots of stories about how her readings helped everyday people and gave them proof of life after death. I challenge you not to cry. This is a must buy.
Help other customers find the most helpful reviews

Angela McGhee is a highly respected Psychic Medium whose ‘visions’ have been publicly acclaimed by Chief Police Officers of the UK. Her ‘visions’ have become an investigative tool that can bring clues or new evidence to lines of inquiry's. Angela has been brought into unsolved ‘cold’ cases when all traditional methods have been exhausted. Nothing really warrants the fact that she is called the ‘Psychic Detective’ other than the results her mind produces in such circumstances. The ‘visions’ produced have played a key part in the gathering of evidence. Details of such events may otherwise been left unnoticed and as for the perpetrators of such crimes, amazingly, she has been able to build a detailed Profile of such individuals in question, noting such details as life story events and personality traits. Angela does not solve crimes as such, the Police do… Her ‘Gifts are considered a ‘key tool’ in the proceedings to gather clues, evidence and confirmation of lines of inquiries to say the least. Here she chronicles details of soul- wrenching accounts of her involvement in such cases and more importantly the life experiences which led her to the work she does today. Those crucial experiences that have helped to mold a unique pathway, to developing and understanding the ‘Psychic’ Gifts ‘which she was blessed to be born with. Her work is a real eye-opener for the most skeptical of people and for those who are seeking the knowledge of the Afterlife and its power to seek justice, help and understanding. This ‘evidential’ document undoubtedly makes Angela McGhee one of the world’s leading ‘Psychic Detectives’. Angela is renowned for her spine chilling appearance in the worldwide Classic US TV series ‘Psychic Investigators’. She is also a successful Author,Columnist and has guested on many programmes in the Media worldwide. She has successfully toured the UK and Europe, and also presents her unique ‘Psychic Detective’ workshops’ talks,seminars and ground-breaking Demonstrations of Mediumship.

" A woman who helps Police on Murder cases! You ALL KNOW how skeptical I am. BUT Angela is fascinating. She told all my production team things about their private lives which left me questioning my blatant disregard of people who claim to speak to spirits!" Nick Conrad, BBC Radio/TV Presenter

" A very special Lady whose insights and visions I could not fail to recognize or justify" Detective Chief Inspector Bob Poole. West Midlands Police

This Award winning semi- autobiographical book reveals to the world even more fascinating encounters, added chapters of a supernatural world, where in - Angela McGhee is a remarkable gifted Psychic Medium who is able to receive and 'sense' incredible details of those who have died. Her 'gifts' through 'sight' and 'hearing' are such that she can offer information that other wise would of been lost. High ranking Police Detectives have come to her for help in gaining evidence,when all physical resources have been depleted.

Quite fittingly, her work on Murder cases has gained her the title 'The Psychic Detective'. Her work has been acclaimed on the USA's Biography Channels TV series 'Psychic Investigators'. and on many 'platforms' across the media world wide to date..

Angela's incredible, insightful journey began, as a little girl,her early recollections of 'visions' was during time spent in a Catholic Convent Children's home at the age of just four years old.

Despite opposition,adversity and suffering, she was 'lead' to uncover and expose the Spirit- world's communications,as she grew in the knowledge of her Guides,Angels and Faith,recognizing its power to heal,give solace, find answers and fight for Justice.

"If I ever found myself in the position of the victims family, I certainly would go down the road to the 'olive branch' of hope that Angela was able to offer" DETECTIVE CHIEF INSPECTOR- Ian Bamber-WEST MIDLANDS POLICE

"Angela's life story has uniqueness and the potential to become a 'based on a true story' film. ALEXIA MELOCCHI-HOLLYWOOD MOVIE PRODUCER

Angela McGhee is one the most talented International Psychic Mediums and Visionary's in the UK with TV /Media appearances on ITV1,ITV2,LivngTV,BBC,Channel 4 . UK/ USA radio Host, Author and Columnist.

Angela has a real warm 'down to earth' approach to her talents, she is an unassumingly 'ordinary' woman with a powerful extraordinary 'Gift' that never fails to shine.

To Buy a signed copy of my book